A Deadly Evening with Mi-kaisha 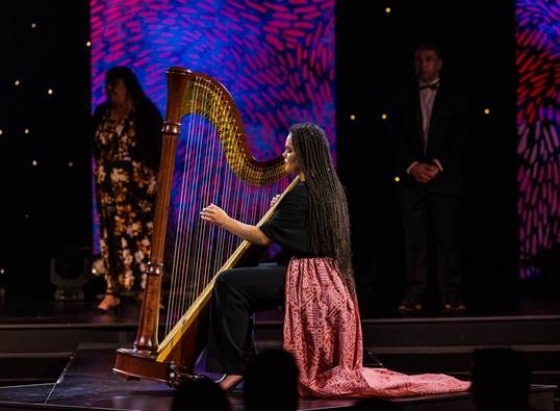 Hear Mi-kaisha in song, and in conversation with Bec Harcourt

R&B Soul artist, Mi-kaisha, grew up on the streets of Sydney’s music scene. The soundtrack of her childhood included soulful tunes from the 90s and island tunes from her father’s Koori Radio Hip-Hop show ‘Island Hopping’.

She describes herself as a ‘city girl through and through’ and represents a beautifully melted dichotomy of sweet and deadly. Her voice is phenomenally soulful and sugary, and yet her lyrics represent hard-hitting often political messages about being a young blak woman in Australia.  She draws inspiration from the strong resilient women in her community.

Mi-kaisha was named National NAIDOC Week Youth of the Year in 2019.

Mi-kaisha is a social entrepreneur and political activist who has a national reach and is regularly featured on SBS, ABC and NITV. She frequently speaks about contemporary issues which impact young Aboriginal people.

She is an advocate for young Indigenous voices in decision making and the empowerment of others as the ‘architects of their own destinies’.

Mi-kaisha is a founding member of the Steering Committee for Kimberwalli at the Western Sydney Indigenous Centre of Excellence. She advocates approaches that allow young Aboriginal people to have a voice through creative expression; acknowledging that young people need different ways to express themselves, tell their stories and be heard.

Mi-kaisha uses music to engage, inform and incite debate about issues affecting Indigenous people. She uses the medium of song to share strength and hope and celebrate the unbreakable, ancient connections we have with each other and with our culture.

Mi-kaisha is the first Indigenous Australian to be accepted into an undergraduate degree at the Clive Davis Institute of Recorded Music at New York University."