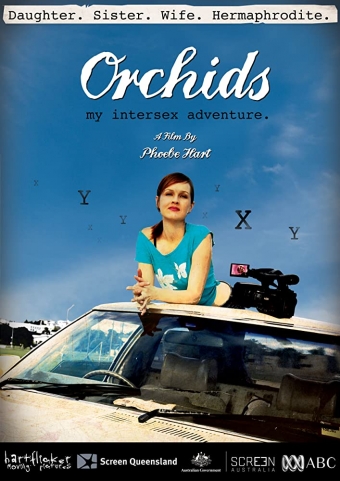 View the trailer and engage with more resources

26 October is Intersex Awareness Day an internationally observed day designed to highlight human rights issues faced by intersex people and share intersex histories. On this day, we recommend engaging with the deeply personal documentary Orchids: My Intersex Adventure (2010), available to view through the UNSW Library.

"In [the documentary] filmmaker Phoebe Hart comes clean on her journey of self discovery to embrace her future and reconcile the past shame and family secrecy surrounding her intersex condition. Despite her mother's outright refusal to be in the film, Phoebe decides she must push on with her quest to resolve her life story and connect with other intersex people on camera. With the help of her sister Bonnie and support from her husband James, she hits the open road and reflects on her youth."

A note on terminology: In the documentary Phoebe refers to herself as a hermaphrodite, which is generally considered an outdated and stigmatising term. While some intersex people seek to reclaim the word with pride to reference themselves (much like the words “dyke” and “queer” have been reclaimed by LBGT+ people), it is suggested the term is best avoided, since the political subtlety is lost on a lot of people.

This screening is supported by the Ally@UNSW Network