Everyone belongs at UNSW.

Part of making you feel at home on our campuses is having Diversity Champions whose role it is to drive significant cultural change around equity, diversity and inclusion at UNSW.

"Creating an environment where all women can thrive"
- Professor Adrienne Torda

“I have a fractional appointment at UNSW and another at Prince of Wales Hospital, four children and work as an education-focused academic. These were all things I was told would hinder my career progression, but they haven’t. As a woman who juggles career and family and embraces it all, I want to help other women – both students and staff. I am passionate about improving gender equity by broadening opportunities, role models and mentors.”

Associate Professor Adrienne Torda works in the Faculty of Medicine, UNSW Sydney. She is a leader in medical education and won the Medicine Faculty award for Excellence in Teaching in 2017. Adrienne has a special interest in educational innovation and has incorporated digital innovations into teaching medical students, including online learning tools.

She currently chairs the Women in Medicine Committee at Prince of Wales Hospital, is patron of the UNSW Women in Medicine Society and co-founder of the WimWam Mentoring Program for medical students at UNSW. She is involved in a number of programs to encourage, mentor and support female medical students and junior doctors as they navigate their career progression to more senior roles.

“I am a woman,  a mother and a migrant. I believe in a gender-balanced workplace to foster excellence and innovation.  As a professional staff member in higher education for more than 20 years, I have experienced the challenges of developing a fulfilling career path, benefiting from opportunities to grow personally and professionally. As part of my role as a gender diversity champion, I will listen to your gender issues, and be a lobbyist for gender equity in the UNSW community.”

Vinita Chanan, UNSW Director, Alliances says she is respected for the differences and lived experience she brings as a woman of migrant background having grown up in India. Vinita also realises the challenges to addressing gender equity and the importance of being open to new opportunities.

Vinita is excited by the possibilities UNSW’s 2025 Strategy will bring for female-identifying students and staff, and to see measure quotas in the strategy.

Vinita is responsible for the development and management of strategic partnerships, including the PLuS Alliance, NUW Alliance, Sydney Partnership for Health, Education, Research and Enterprise (SPHERE) and Sydney Quantum Academy. She undertakes strategic planning and business development and evaluates programs and initiatives delivered through the Global Learning Network and Global Knowledge Network of the PLuS Alliance. 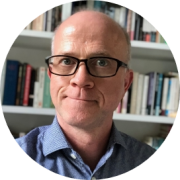 "Gender equity can only be achieved when people of all genders work together and call for change.

Men can sometimes frame their commitment to gender equity by saying that they want a better world for their wives and daughters to inhabit. But what if men were to say they support gender equity because they have sons? Or because they have a husband, or a boyfriend, or they find themselves confined in some way by narrow definitions of their own gender roles? If men view gender inequity as an issue that only impacts women, they will more likely have the first response. If they see how men can also benefit from gender equity, they might respond in the second way and be more engaged in the conversation.

In my opinion men need to be brought into the conversation about gender in a more meaningful way. This will help meet inclusion targets (which of course are fundamentally important). It will also help engage in discussions about the many ways that gender-specific expectations, on the part of both men and women, can influence our decisions, often in ways that have unjust outcomes for everyone."

Timothy O’Leary is a philosopher who has worked and studied in Ireland, Paris, Hong Kong.

In his current position as Head of the School of Humanities & Languages at UNSW, he is particularly keen to promote the critical role of the humanities in our contemporary world of splintered politics, huge inequalities, and a growing environmental crisis.