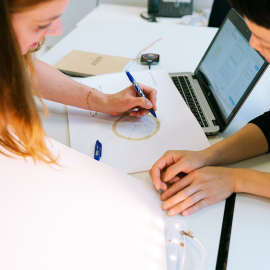 We are a proud member of the Athena SWAN Charter and one of the 45 institutions participating in the Science in Australia Gender Equity (SAGE) Athena SWAN program.

In 2018 UNSW received the SAGE Athena SWAN Bronze Institutional Award for our work and ongoing commitment to advancing gender equity and diversity in STEMM disciplines in higher education and research.

The award submission included the UNSW Athena SWAN Action Plan: 2018-2022 (Action Plan), which outlines our commitment to addressing gender bias, particularly in academia, and developing a more inclusive culture where all staff can succeed, regardless of their gender.

Two examples of UNSW’s initiatives to improve gender equity include the recruitment and retention of top female candidates via the SHARP program and 2025 targets for 40% female academic staff at levels D & E and 50% female professional staff at level 10 and above.  Read more about our Athena SWAN findings and Action Plan.

“In my term as Academic Lead of the UNSW Athena SWAN initiative, with the SAT, I would like to explore the success measures of the Action plan during the COVID-19 period to understand the impact on academic and professional staff initiatives. I am very enthusiastic about working closely with the key EDI representatives across the University and externally to identify new opportunities and respond to the existing priorities. I anticipate that the next two years will require building on the already impressive work undertaken by the SAT to prepare for the next award.” Scientia Professor Fiona Stapleton

UNSW has agreed to publicly align our gender equity journey with the Australian Academy of Science Women in STEM Decadal Plan. The champions process builds on the efforts already underway across many organisations including UNSW, providing a platform to share knowledge, act, evaluate and create accountability.

The Illuminators: Scope for Change

A virtual exhibition acknowledging and celebrating the beautiful, creative work of a scientifically and culturally diverse group of female-identifying microscopists from UNSW, the Garvan Institute of Medical Research and the Victor Chang Cardiac Research Institute.

Universities Australia Executive Women (UAEW) is a national group sponsored by Universities Australia. It provides strategic advice and high-level guidance for Australian universities, their governing bodies, associated organisations and state and territory-based networks to improve the representation of women at executive levels of university leadership and governance.

The work of UAEW builds on the longstanding work of individual institutions, as well as sector-level strategic initiatives, including the Science in Australia Gender Equality (SAGE) initiative and Universities Australia’s respect and equality program. The issue of women’s underrepresentation in senior WOMEN AND AWARDS leadership roles is complex and requires actions on many fronts. Awards can be a powerful tool to acknowledge the contributions of Australian women, place their achievements on record, and advance the individual careers of talented women.

This resource provides helpful tips to improve gender equality in the awards system, including the nomination process within universities. It is particularly relevant to Vice-Chancellors, managers and supervisors, and chairs and members of nomination and awarding panels.

Photo by ThisisEngineering RAEng on Unsplash