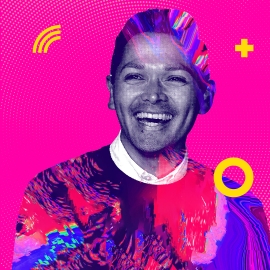 "Diversity is about uplifting the voices that have often been unheeded - and valuing these voices equally. It's recognising that our common humanity is strong enough to withstand and is in fact enriched by our differences".

Collins is Filipino-Austrian and moved to Australia at 13 years old. As a ‘gay, brown immigrant’, finding a sense of belonging in Australia hasn’t always been easy. Actions that make someone feel excluded are sometimes overt (such as being bullied in school) or more subtle, such as when people ask Collins - “but where are you really from?” This question is not often asked of white Australians and conveys the notion that to be Australian there is a certain physical criterion - skin colour, facial features - and that people who look different are foreigners.

“If you grew up in Australia or have made a deep connection to this country, you would rightly call Australia home. I believe our values are big enough to welcome people from all cultures.”

Collins believes true diversity isn’t just about filling a quota, but rather uplifting the voices that have often been unheeded – and valuing these voices equally. Since joining UNSW in 2018 as Project Manager for Education Focussed Career Development, Collins has seen firsthand the university’s commitment to fostering inclusivity through actionable policies.

However, Collins says people’s day-to-day behaviour also contributes to shaping a community that values diversity. “I work with colleagues who value diversity but sometimes feel unsure. They worry about saying the ‘wrong thing’. Being inclusive isn’t always about being perfectly politically correct. I think an attitude of openness and willingness to learn is far more important. Learn that hard-to-pronounce name, give minorities the chance to speak up in meetings or back them if they have a great idea, and do your bit to make sure everyone feels appreciated and that they belong to this great community.”